In our current era of ‘new media,’ where everyone has a blog, including journalists and non-journalists, and some blogs get equal if not bigger audiences as mainstream media, the line between journalism and non-journalistic opinion is blurring. When I teach media relations, I usually say that journalists are subject to a code of ethics, and accountable to their editors and publishers, whereas bloggers are generally accountable only to their readers, so if people will read what they write, they can say what they want. In PR, we too have a code of ethics, although one need not subscribe to it if one is not a member of a PR association, which you don’t have to be in order to do communications. And now that we all have a forum (online) to publish opinions, it can be hard to tell if a writer is subject to one of these sets of rules or not.

So it’s perhaps not surprising that sometimes a conflict comes to light, where a journalist is accused of playing both sides of the fence. Even if it’s only the appearance of conflict, there is a public expectation of neutrality from mainstream media that seems to call for a higher standard of ethics. As with the situation where a PR agency tried to pay journalists working at mainstream media outlets to write favourable blog posts about a client, the ethical line isn’t always clear, but the public expectations on the ethics of mainstream journalism is clear.

Take the case of Amanda Lang, a business host on CBC TV, who was accused of being in conflict of interest on stories about RBC and the bank’s use of foreign workers because she has been paid by RBC to give speeches, and because her boyfriend is on the RBC board.

Lang was accused of interfering in the reporting of a big CBC news story, both at the network and through an op-ed she wrote in the Globe and Mail. While her take on the RBC story was more pro-RBC than the position of the reporting team at CBC’s Go Public, the real accusation is that her take on the story resulted because she has been paid by RBC for speeches, and because she’s dating someone at the bank. As the Globe and Mail summed up:

“At issue is a series of allegations… – denied by Lang and the CBC – first, that Lang had a number of paid speaking engagements for a corporation whose representatives she later interviewed in a softball manner on CBC; second, that Lang attempted to diminish CBC’s coverage of the revelation that Royal Bank of Canada was laying off Canadians and replacing them with foreign workers; and, third, that her involvement in the story was tainted by both personal and professional connections to RBC.”

Lang defended her actions and CBC backed her up, but the appearance of conflict still hangs over her. No one comes out and says RBC paid her directly to influence CBC’s coverage of the bank, but since they sponsored some of her speeches, from which she benefit financially, the implication is that she did exactly that. And that taint still follows her.  Google her name and the stories about the allegations of conflict are all over the first page of results. The Globe’s TV columnist called for her to resign.

“It’s time for Lang to get down off her high horse and go away. This is about the CBC’s reputation, not hers, which is already in tatters.”

The CBC took, and is still taking, flack for it’s defence of Lang. Part of the fallout for CBC, which is still facing public criticism of its handling of the Jian Ghomeshi situation, is that CBC has now banned its on-air journalists from accepting paid speaking gigs. At least now that’s clear, right?

Lang wrote another op-ed in the Globe to defend herself, and said:

“In retrospect, I see that I allowed this circumstance to develop, by assuming that my integrity would not be questioned if I accepted speaking fees from business associations and companies…I support CBC’s decision to change its policy, and I will no longer accept paid appearances, and in fact began refusing payment several weeks ago.”

So her thinking seems to have been that she knew she didn’t do anything wrong, so was shocked when anyone accused her of wrongdoing. Perhaps not her best approach at apologizing and regaining public trust.

But the real issue isn’t just about paid appearances, it’s about ethics and avoiding the appearance of conflict of interest, and how we hold mainstream media organizations and their journalists to a higher standard. A blogger might have been let off more easily, but not the CBC. Kathy Tomlinson, the reporter who broke the RBC story said:

“As a result of this, many people – including me – are asking one simple question. Why it is ever OK to have any perceived conflict of interest, under any circumstances? This is not about Amanda Lang. It is about the long standing belief most journalists have – that conflicts should be avoided at all costs or explicitly declared up front.”

Journalists and conflict of interest part one: Double dipping into the PR pond

For those working in journalism, the leap to PR doesn’t seem like a big jump, since it’s the reverse side of the same coin, it’s still writing and storytelling, and many skills do transfer to PR. I know many ex-journalists who have crossed over, and many still in journalism eyeing the other side for future employment as mainstream media continues to downsize.

And many people today have more than one job. “Moonlighting” used to be a bad thing, but these days having more than one occupation shows our diversity, our entrepreneurship, or maybe just our need to pay the bills, and it’s generally not frowned upon unless there’s a conflict of interest.

Ah, there’s the rub. You can work for two different entities, but not if they’re competitors, or if the goals of one cross into the goals of the other. And when one of the hats you wear is being a journalist, moonlighting in PR can be a big problem, or at least be perceived to be a big problem.

So perhaps its not terribly surprising that journalists have gotten into some hot water recently when they were accused of dipping their toes into the PR market while still working for mainstream media.

Let’s look at Leslie Roberts, lost his on-air job at Global TV after the Toronto Star outed him for owning part of a PR agency whose clients were often given airtime. He thought he could work in PR and journalism at the same time, as long as he didn’t personally pitch stories to his network. Hmmm…

The Toronto Star (they do seem to be breaking a lot stories lately about media people messing up) found out that Roberts, who hosted Global’s News Hour and the Morning Show, and was the executive editor of Global News, owned part of BuzzPR, a Toronto PR agency. Their story points out numerous examples of Buzz clients being interviewed on Global, and even of Roberts himself plugging some Buzz clients.

Global apparently hadn’t known about Robert’s stake in a PR agency, and suspended him right away. The Star interviewed Roberts before his suspension, and he said he had done nothing wrong but would resign from BuzzPR, the public relations firm he owns with a partner.

“Roberts said his involvement in BuzzPR never interfered with his work as a newsman. He initially dismissed the PR work as similar to other jobs he has had in the field of journalism. “I am not a one-trick pony. I have always done freelance work.””

A week later, he quit the network. A former journalist, Tony Burman, said that there was probably no other way out.

“Mr. Roberts’s suspension should be “a warning bell too all news organizations” about a gradual “blurring of the line between journalism and PR…no amount of disclosure would make Mr. Roberts’s dual role acceptable.”

Other journalists and PR folk were appalled at the situation. And Global TV took a lot of heat for letting it happen. 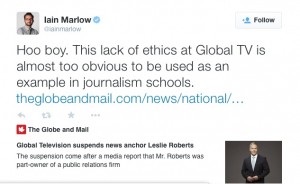 Moonlighting may be okay for many industries, but there are lines you just don’t cross when it comes to mainstream media. PR people can’t pay reporters to write about their clients, and double dipping into PR while still in journalism is just not on, at least not as long as you still work for mainstream media.