You’d think that International Day of Yoga would be a happy-feel-good thing all around, especially in the lotus-lover enclave that is Vancouver, British Columbia. It could have been, but then it became political, and got all muddled it up. And when it all first blew up, that was bad enough, but then the Premier thought it would be funny to mock her critics, but that blew back on her pretty badly too.

tional Yoga Day, June 21, 2015, the Burrard Street Bridge would be shut to hold a giant outdoor yoga event on the bridge, called Om The Bridge. At first it sounded like a fun event for a yoga-obsessed city, but then critics started delving in and it went sideways very fast.

Critics were pissed off at all angles. First, the Burrard Bridge is a major thoroughfare into downtown Vancouver, and blocking it for several hours would really, really piss off drivers, businesses and commuters, even on a Sunday morning. Given how annoyed drivers have been over the years when the bridge was either under construction or losing lanes to create separated bike lanes, it seems obvious that closing this major crossing wasn’t going to be met well.

And then there was the corporate aspect. This Om the Bridge event was being sponsored by two yoga companies and Altagas, and while the yoga companies weren’t a problem really, a gas company didn’t gain public favour in a province where many are opposed to gas and oil pipelines. Even beloved children’s singer Raffi voiced objections about the corporate-ification of yoga. A hashtag quickly gained traction suggesting people #shunthebridge. Another big objection was that despite the corporate sponsors, the event was going to cost taxpayers $15,000.

And oh yeah, it turned out June 21st was also National Aboriginal Day, so now they’ve also pissed off the First Nations, something you just don’t do in BC. First Nations artists and other leaders began rallying people on social media calling for a peaceful disruption of the mass yoga class with signs, singing and drumming.

So with all the backlash, what does the Premier do? She goads her critics and makes it worse.

This tweet generated hundreds upon hundreds of comments and made the Premier’s office look even sillier than it had before for calling her critics “yoga haters” and for dragging Tai Chi in too. For example: 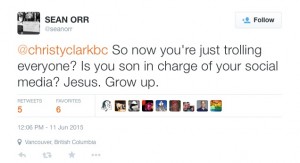 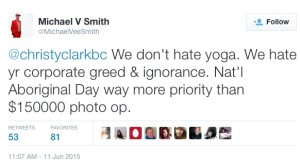 But kudos to Taoist Tai Chi, who the Premier tried to drag into her controversy. They immediately issued a statement distancing themselves from Christy Clark:

“We would like to make clear that we were unaware that this photo had been taken or that the premier had even stopped by our location, which was closed at the time,” Jim Nicholson, a BC spokesman for Fung Loy Kok Taoist Tai Chi.

After a few days of controversy, the yoga companies pulled out as sponsors, and Om the Bridge was cancelled before the week was out.

While this whole thing only lasted a week, it was a week of bad press for the government from yoga, something that shouldn’t be a source of controversy. It went wrong, and then it was made worse when the Premier mocked her critics. I’d say this is a classic case of mistakes in media relations. Namaste.

Everyone’s a critic, but should every criticism worry you?

I saw a news report about a brand that got in hot water for a free concert they threw in Brooklyn. The concert was sponsored by Levis, the jean company, and the “price” of admission was to wear an item of Levis clothing. The news report said “dozens” of fans were turned away for not wearing Levis.

Okay, I thought, another example of a campaign gone wrong. People must have been all up in arms over this. Social media must have been buzzing with negative comments. The brand probably reacted. But no, not really. And that has turned out to be the real lesson here.

Here are the facts: Levis sponsored a free concert in Brooklyn, NY, with popular indie rockers Haim and Sleigh Bells to launch a new marketing campaign “Live in Levis,” where consumers are asked to upload images or write posts about their favorite moments wearing Levi’s products. On ther website, Levis said that in order to get in to the outdoor concert venue, you had to wear Levis clothing. The concert was a huge success, with big crowds and big buzz for the brand. But unlike some other marketing promos we’ve seen, Levis actually enforced the “wear Levis or else

” dictum and did turn people away who weren’t sporting their brand.

One (and I repeat, one!) news report in the New York Daily News, mentioned that “fans were upset…to find that they were denied entry…because they weren’t wearing Levi’s jeans…observers told the News scores of ticketed fans showed up without the prescribed attire and were denied entry. They were surprised the corporation so strictly enforced the ban.” A teenager was quoted:

“One guard at the door said ‘I might as well be a CEO. I’m saying ‘you’re fired, you’re fired and you’re fired,’” says Dylan Kelly, 16 of Manhattan. “I saw couples being turned away because the guy wore Levis but the woman had a skirt. Or, if a group of guys had on Levis but one didn’t, they would turn them away.”

The News found two critical tweets quoted. And those weren’t even all that intelligent or critical. I looked all over the interweb to find other critical tweets, but not a one could be found. The only thing I did find was several PR or marketing sites quoting the Daily News article and calling it a “PR nightmare,” saying “Levi’s has landed itself in a little hot water,” “worst possible scenario,” and “sponsorship gone wrong.”

But was it any of those things? I think not. Brand fans were thrilled, if the concert reviews and positive posts from the few days around the concert show. The only ones saying it wasn’t a great experience were a handful of turned-away fans in Brooklyn and the Daily News. Oh, and of course all those PR and marketing critics out there.

I applaud Levis for not caving to these few voices and making more of it than it really was. If  this was a genuine backlash, with real media (mainstream or social) reaction, then  the company should respond and manage the media crisis. But if the reaction is this small and controlled, sometimes you gotta let the critics have their say without responding, and just rock on.

If you fake a caller on a call-in, you’re going to get caught

All media relations pros know call-in shows are fraught with danger for spokespeople. You never know what questions or comments you’ll get from callers, and the chances of sticking to your key messages is dicey if the calls are off topic. And when your spokesperson has a reputation of having a quick temper, the danger of him getting upset with a caller who goes off topic or complains is even bigger. That’s why it’s so tempting to want to seed the call-in lines with friendlies — people who will ask questions you want your spokesperson to answer, who will lob softballs that lend themselves to being answered by your key messages just as you scripted them.

Now imagine the job of being Rob or Doug Ford’s media relations people. Wait, don’t do that. You might get a headache.

Anyhow, last summer Rob and Doug got caught. The mayor of Toronto and his brother, a city councillor, had been hosting a call-in show on talk radio in Toronto for a year, but CBC outed them for having a friendly plant call in about a half dozen times.

A male caller identified as “Dave” had been put on air on at least six occasions, calling from different parts of the city. CBC News learned that this guy was working as the mayor’s director of operations and logistics. Apparently staff in the mayor’s office put a stop to his calls once they found out about them, and the calls ended months before he was hired by the mayor.

It seems Dave is a long-time friend of the Ford family and was involved in Doug’s election campaign. When Doug Ford was asked about the story about Dave and his calls to the radio show, he said that he had “laughed it off” after learning that his friend had been calling.

Not what I would have recommended. You’ve been caught. Laughing it off is not appropriate. At a minimum, you must acknowledge that this, if true, is innapropriate. If you don’t want to fall on your sword and admit the mea culpa, at least note that this kind of thing is wrong and you’ll look into it to ensure it doesn’t happen again.

But hey, we’re talking about the Fords of Toronto, and admitting mistakes isn’t exactly their forte.

My favourite part of the story is the response from other city councillors.

Coun. Adam Vaughan suggested that council is paying little attention to what the Fords are saying on the radio, or doing at city hall.  “Most of us have tuned the mayor out, and none of us really listen to the radio show.”

A promotional idea that sounded good in theory, but not so much in practice

A minor hockey team in Arizona thought it would be a good idea to stage a stunt to encourage ticket sales. They put their top admin officials into a scissor lift and hoisted them into the air, saying they would only come down when 300 season tickets were sold.

Well, you can imagine what happened next. The Central Hockey League’s Arizona Sundogs sent their GM, Captain and PR chief into the lift on a Sunday. They had a pulley to raise food and lower their waste. They had an umbrella to block the desert sun. What they didn’t have was enough people to buy season subscriptions. They ended staying up there for days, with really cold nights, wind, and maybe even some rain.

I couldn’t find any reference to the end of the promo stunt, but I did find lots of news reports that the staff of the Phoenix Coyote’s farm team spent at least five days 30 feet in the air on the lift. And that they didn’t reach their goal, although one report said they sold nearly 250 tickets. Then again, if their goal was media relations, maybe it wasn’t the worst plan ever. They did get a lot of media attention, at least by the fourth or fifth day.

While the team didn’t hit their number they did get the exposure they were looking for, with Fox Sports and Deadspin, grabbing the story…Viral as many have learned doesn’t equate into dollars right away usually, but it put their brand forward and may lead to more creativity and a bigger payoff down the line. Maybe they won’t get full season subs, but the creativity led to casual exposure and maybe an additional sponsor or two, as well as individual game sales as well. Bottom line, while some may deem the promo a failure, it was in reality a great success on many levels…great example of spinning a negative into a plus.